No connecting thread this week, just a sampling of the songs I’ve listened to recently with a little blurb about each.  Hope you enjoy them!

Mos Def-Twilite Speedball Instrumental (This is the song featured in the Cosmopolitan hotel commercial.  Great beat, fun to listen to)

Natalie Prass-Christy (A bit kitschy but love the production and her voice.  Looking forward to seeing her live this year)

Trick Daddy Featuring Trina and CO-Shut Up (This is a blast from the past for me and makes me want to do an all Miami Anthems post, which will happen)

King Tuff-Headbanger (Great band, this song was put on my wife’s Valentine mix this year.  Yup, it’s a love song)

Thao and The Get Down Stay Down-Move, live from Austin City Limits (Great song normally, but I went with the live version for the energy they bring and the interesting cover near the end)

When I was still in retail, I had good repertoire with one of my regular customers. He was one of those tough guy contractor types; rough cracked hands, rough cracked sun-bleached neck, and always wearing jeans with a set of keys clipped to the belt. He told me once that he used to be a musician. I believed him because he wasn’t a liar, but more importantly because it made the back story I had made up for him in my head waaay more interesting. This guy would always come in wearing a Fox News ball cap. One time, I jokingly asked him “How long until somebody slaps that hat off your head?”  The look I got from him could freeze a grizzly in it’s tracks. “They haven’t yet…and they WONT” he replied all tough.  I left that interaction thinking that you have to be pretty damn tough to publicly broadcast that you’re not only willfully ignorant, but strongly impressionable.  I sometimes think back on that moment and wonder if maybe my filter of the experience had been too strongly influenced by The Daily Show and Jon Stewart. I genuinely liked the guy, but couldn’t get over his silly hat, that was a stupid judgement on my end. But to be fair, we all know that was more than a hat, it was a line in the sand.

Like him or hate him, Jon Stewart’s yearlong retirement party is probably the most significant TV departure for our generation. We were too young to really relate to Carson, in fact a lot of us might not even have been born yet. Some of us were attached to Letterman and his dry wit, which became more and more out of touch as each year passed. Jay Leno was or I guess, still is, a comedy graveyard that only those close in age to actually permanently residing in one find amusing. And lastly, Conan made himself partly irrelevant by choking his opportunity and then spearheading a 2nd rate cable channel. The only person that remained constant for many of us has been Stewart. His relentless take downs of Fox News are a thing of legend. Part of our consciousnesses were formed with Stewart narrating in the background. It came as an emotional shock to many of us when his retirement was announced. We’re left speculating “who will fill his shoes?”. Comedy Central will try, but whomever it is, won’t last very long. Jon’s retirement will take the Daily Show with it.

Looking back, Stewart’s retirement seems appropriate. The material had begun to get stale. Every show became clock work: cue the Fox News clip followed by Stewart making a face and either overly relying on the word “FUCK” with a loud sigh or mugging for the camera in either his “New York Tough Guy” routine or his “Jerry Lee Lewis”. Don’t get me wrong, it was still great. And never forget, he single hand-idly pushed through the 9/11 Responders Bill. But the retirement announcement has seemed to breath new life into his shtick.  He seems to have the finish line in his sights and is kicking it up a notch. Take last night’s episode for example:

The above video leaves us asking, who will be making fun of Fox News for us now?

Certainly not my retail customer, but honestly besides his affinity for Fox News, he was totally a great guy. I shouldn’t have judged him like that. He used to bang one of the Bangles.

I don’t remember which, Vickie or Debbie.

Today, we enjoy the phat groove on the real with Salt n Pepa. Seriously, this song holds up 22 years later. I realize that all hip hop groups seem to have their shelf life (except for maybe The Roots) but I wish Salt n Pepa was still a thing.

I am attending my East Coast Implementation Conference in Henderson, NV this week – it is officially the furthest west I’ve been, to date.

I can tell you that the glitz and sparkle of the strip does not extend to where we are staying. This is, like, the dregs of society. Locals who sit at the penny slots all day and all night, smoking cigarettes indoors while their oxygen tank sits next to them in their Rascal.

There is a steady stream of adult contemporary music piped in, but it’s hard to hear over the constant ringing and jingling of all the slot machines and video poker. Tomorrow night, we are going to be released to “The Strip” for some bona fide Las Vegas shenanigans and I am already looking into tattoo parlors and listening to Tom Jones non-stop. 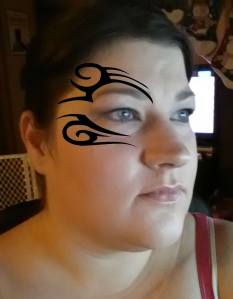 Shen and I hope to record a Live From Las Vegas (adjacent)! episode of the We Can Podcast That cast on Thursday!

This blog post has been brought to you from Fabulous Henderson, NV courtesy of my company’s dime!

I’ve reached an age where I’m going to these shows, yet after each one I say to my group of friends “I think this might be the last one for me guys.”  As Roger Murtaugh would say “I’m too old for this shit.”  Late night I’m stumbling out of whatever venue we’ve just shacked up in and my body is already feeling the trauma. The way home is too far and that morning is coming too quick. Not looking towards spending another day with a two year old just a tad bit too excited to be alive while daddy nurses another hangover because his 30 year old ass likes to pretend it’s still 20. But in a week I forget about that “next day feeling” and all that’s fresh in my mind is that moment when the guitar hits it’s peak, the stars align, and my brain melts into a cosmic ooze. When you’re locked in with the sound and you think that the people playing this music are actually inside your head. Your the maestro for that moment, you raise your hand towards that band as if you’re in a Pentecostal church in the south and this music is your savior. I want more of THAT. I’m chasing that musical dragon man. Searching for my next fix. It doesn’t matter how shitty I’m going to feel the next day, how old my tired bones get, I’m in for that moment. And that’s why, after every show, I say I’m done, but next week I’m buying that 3-day pass for moe. in Chicago. The music keeps sucking me back in.

If you’re reading this and you don’t know that moment or feeling I’m talking about, you’re going to the wrong shows. Get on the bus.

In our last episode we discussed the Motown Sound and talked about several number 1 records produced in that era, including a song from The Capitols called “Cool Jerk”.  As a joke during the episode I said I would dedicate a Five for Friday solely to “Cool Jerk” in honor of it being Chris’s favorite song.  So here we go, five versions of “Cool Jerk” by The Capitols.

For this episode we stumble our way through discussing the legendary “Motown Sound”, while covering barbecue sauce, prior rap Grammy winners, and Robert defends himself from unsavory allegations.  We swear we’re trying to make this a decent show for our listeners.

Many moons ago, (January of 2007, to be exact) on the NPR show “Eight Forty Eight” they had 3 bands cover New Order’s 80’s classic “Bizarre Love Triangle” and what the Occidental Brothers Dance Band International did with it was AMAZING.

I have no recollection of the other 2 bands’ versions because this one has always stuck with me.

They put a whole new spin on this with the West African dance beat and sassy sax (yep. Sassy.)

And that satisfies your culture requirement for today, please feel free to go on about your business.

In Case You Missed It